Hans-Joachim Lustig, a resident of Lübeck, Germany, is the founder and director of I Vocalisti. After completing his degree in Music Education from the Lübeck University of Music, he has spent his career working as a freelance director and conductor. In 1994/95 he was the recipient of a fellowship awarded by the Deutsche Musikrat (German Music Council). He conducts seminars for choirs and choral directors both nationally and internationally. Lustig is also artistic director of the successful German boys’ choir, the Chorknaben Uetersen, whose male voices won 1st Prize at the 6th German Choir Competition in 2002. In addition, he is a sought-after adjudicator at choral competitions and frequently serves as a guest conductor for various choirs, including the Belgrade Radio Television Choir, the Philharmonia Chorus in London and the Ankara State Choir.

Depending on the project, the chamber choir I Vocalisti consists of 20 to 60 vocally and musically trained singers from Northern Germany, who come together to perform challenging sacred and secular choral music at a professional level.
In addition to performing works by old masters such as Bach, Brahms and Mendelssohn, the choir’s repertoire focuses on contemporary pieces. On these occasions, the singers also have the opportunity to work closely with composers. Among others, Vic Nees (Belgium) and Aleksandar S. Vujic (Yugoslavia) have written pieces for the choir. I Vocalisti is also distinguished by its work with various composers and conductors such as Ugis Praulins, Eric Whitacre, Ola Gjeilo and Christoph Eschenbach. Furthermore, the choir regularly expands its musical spectrum by working in crossover projects with such groups as the Klazz Brothers and the Danish world music band Afenginn.

Since its founding in 1991, the ensemble has performed in numerous concert series and has received prizes at national and international choral competitions, including 1st Prize at the 6th German Choir Competition in 2002 and 1st Prizes at the international choral contests in Tolosa, Spain in 2004, and in Cork, Ireland in 2009. In addition, I Vocalisti has recorded works for radio (NDR) and television (ARD) as well as for the labels Carus, Rondeau and Sony. The ensemble performs at major festivals, including the “Schleswig-Holstein Musik Festival” and the “Festival des Choeurs lauréats”.
As a guest choir for master classes, I Vocalisti has worked with directors such as Volker Hempfling, Frieder Bernius and Malcolm Goldring. 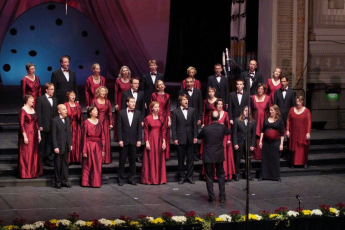